ProLogium Technology, a global leader in innovative solid-state battery technology, confirmed today that the company is in the process of selecting the location of its first-ever overseas solid-state gigafactory in light of the surging global demand for electric vehicles over the next decade. ProLogium plans to establish its overseas gigafactory with an estimated total investment of over USD 8 billion and reveals that a feasibility study for potential sites has been initiated. Shortlisted locations include those in the United States, France, Germany, the Netherlands, Poland and the United Kingdom. 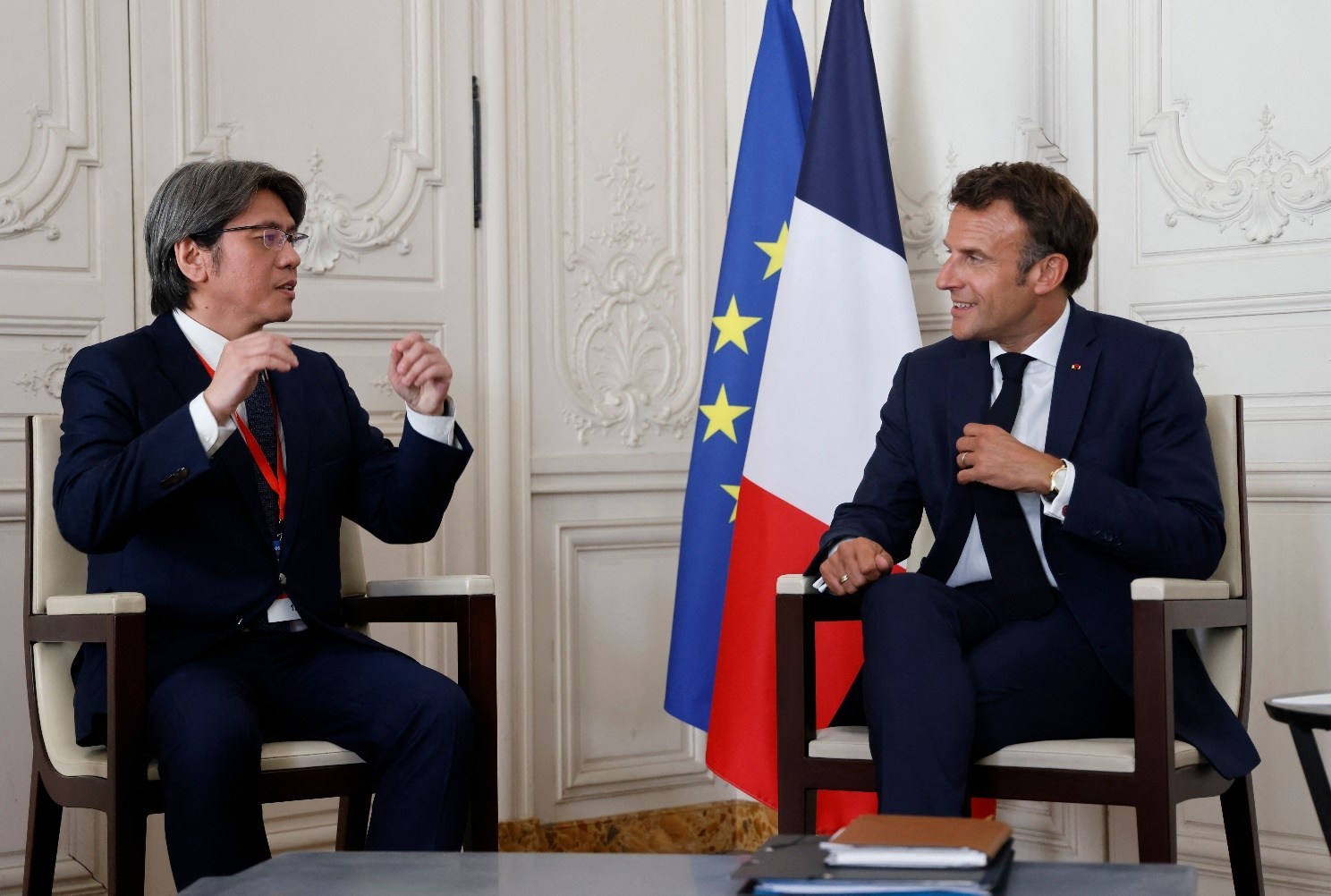 French President Emmanuel Macron (R) speaks with ProLogium CEO Vincent Yang (L) during a meeting as part of the 5th edition of the “Choose France” Business Summit in Versailles, southwest of Paris, on July 11, 2022. Credits: imagery supplied by LUDOVIC MARIN/AFP via Getty Images

ProLogium has a three-phase construction plan for its first-ever overseas gigafactory. The total capacity is expected to reach 120GWh when the plant is complete. The firm is currently assessing potential plant locations, and a final decision is set to be made by the first quarter of 2023. A due diligence process will be performed before the construction project kicks off. ProLogium also estimates that by 2031, the project will create over 6,500 jobs, and the company is poised to begin its global talent recruitment efforts in the areas of engineering, product research and development, business management, and more.

ProLogium’s manufacturing competence has been well established in the past nine years. Its first production line for consumer applications began operating back in 2013, and its roll-to-roll EV battery pilot line began production in October 2017. The battery maker owns proprietary technologies covering over 500 (applied or awarded) patents worldwide and has established more than 4,000 quality control items in its production processes, achieving 99.9% yield for its single-layer cell manufacturing and 94% yield for multi-layer cells. The company has already shipped more than one million cells for consumer electronic applications (from 15mAh to 1Ah) with a very high level of customer satisfaction. It has already begun the long testing and certification process with key global car OEMs by delivering nearly 8,000 EV battery cells (50~60Ah). These results laid a solid foundation for its first 3 GWh mass production plant due to start operating early 2023.

“Our first-ever overseas gigafactory serves a key strategic purpose – being close to our customers to deliver products and services in a timely manner,” said Vincent Yang, CEO and Founder of ProLogium Technology. “The United States and Europe play a crucial role in the global automotive industry value chain. Automakers are accelerating their plans to extend their EV product range. With manufacturing bases in these regions, we will be able to better meet the market’s needs and benefit from local policy support. The proximity allows for local production and local supplies, planting closer to customers to reduce carbon footprint – a win-win solution for the benefit of both our customers and ProLogium.”

“In early July, with the recommendation and assistance from the US Department of Commerce and Business France (Taiwan/France), we were invited to the SelectUSA Investment Summit and Choose France Summit. We met with US officials and governors during the SelectUSA Summit. In Paris, we discussed next-generation battery technology breakthroughs with French President Emmanuel Macron at a face-to-face meeting during the Choose France Summit and presented our overseas expansion plans and leading advantages in technology and mass production. Both the US and French governments expressed their full support for ProLogium to set up plants locally, an indication of the increasing strategic importance of the next-generation battery,” Vincent Yang commented.

ABOUT PROLOGIUM
Founded in 2006, ProLogium is a global leader in innovative next-generation battery technologies for vehicle, consumer, and industrial applications. ProLogium is the first battery company in the world to mass-produce solid-state lithium ceramic batteries. Its proprietary technologies cover over 500 (applied or awarded) patents worldwide. ProLogium’s automated pilot production line has provided nearly 8,000 solid-state battery sample cells to global car manufacturers for testing and module development. ProLogium Technology’s GWh level solid-state lithium ceramic battery plant will be the first in the world to go online in early 2023, and it aims to begin scaling up by the second half of the year, followed by capacity expansion plans in major markets worldwide. Further information can be found at www.prologium.com