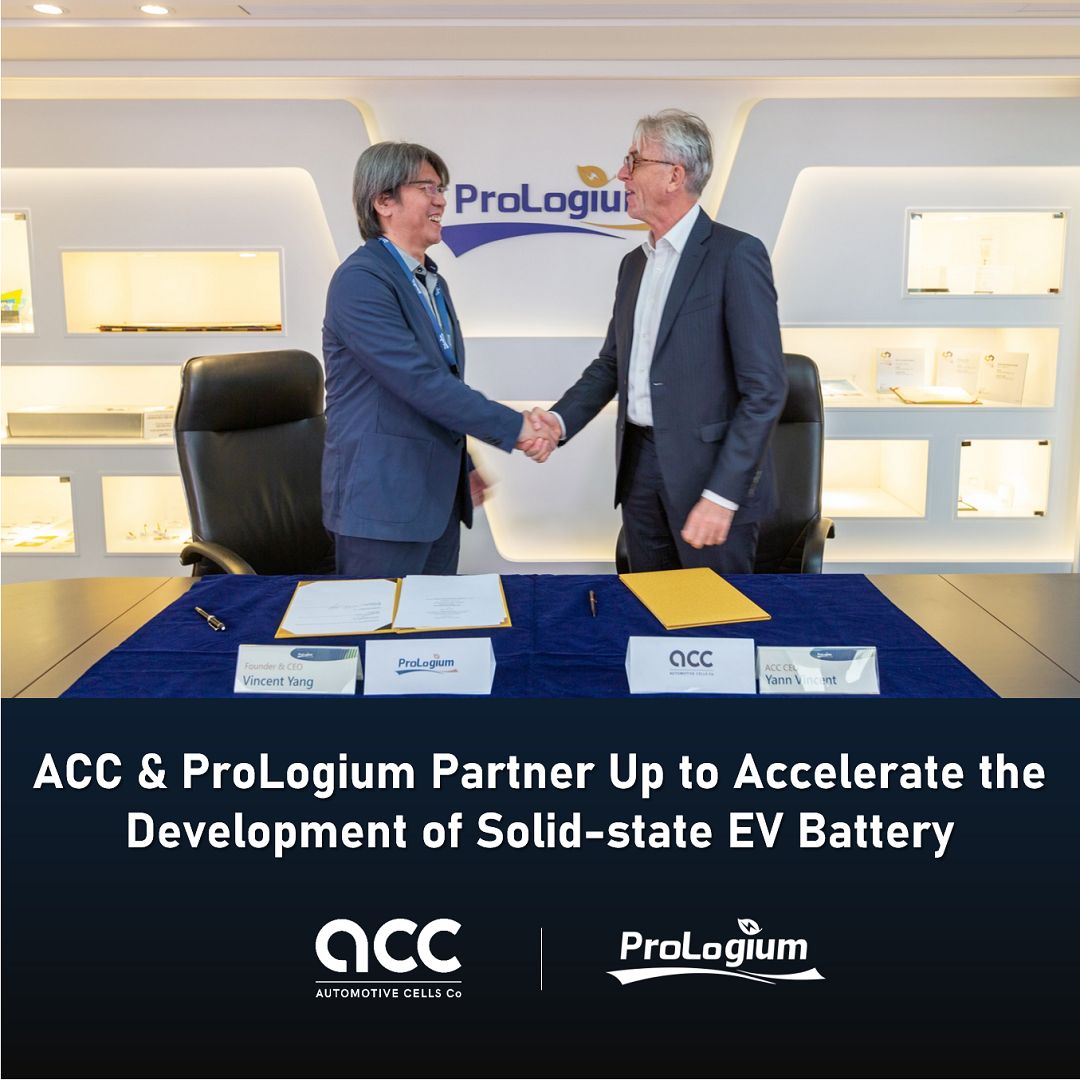 Automotive Cells Company (ACC) and ProLogium Technology have signed a Memorandum of Understanding (MOU) to cooperate in the development of electric vehicle (EV) solid-state battery. Under the MOU, ACC and ProLogium will focus their joint efforts on the collaboration for solid-state EV battery development. “ProLogium Inside” EV battery solutions will be developed for customers based on ProLogium’s leading-edge solid-state battery technology and subsequent supply chain and/or industrial agreement concluded by both parties.

“We are very pleased to partner with ACC and further build on our pioneering role in enabling the fast transition to electric driving,” said Vincent Yang, founder and Chief Executive Officer of ProLogium Technology. “We are a major innovator in battery technology with already proven manufacturing capabilities, and we aim to develop a large-scale overseas manufacturing footprint and cross-culture operational capability as a driver for a more sustainable world with our high-performance, safe and affordable technologies.”

“ACC’s purpose is to develop and produce battery cells and modules for electric vehicles with a focus on safety, performance, and competitiveness, while ensuring the highest level of quality and the lowest carbon footprint. As one of our key partners, ProLogium will help us to deliver EV products with advanced battery technology and establish an adequate supply chain to enable a more enjoyable and safer driving experience.” said Yann Vincent, Chief Executive Officer of ACC.

Earlier this year, ACC confirmed the construction of its first gigafactory in Billy-Berclau (Hauts-de-France) with the aim of achieving an installed capacity of 120 GWh in Europe by 2030. ProLogium has also confirmed the search for its first overseas gigafactory site for next-generation solid-state batteries in Asia, Europe, or USA in light of the exponential growth in demand for electric vehicles over the next decade. The battery maker has been in discussion with multiple agencies in these regions.

About ACC
Born in the 2020s, we’re built for the fast-paced, high-tech environment that’s the modern energy industry. We thrive in the world of EV battery technology. We are the result of an initiative undertaken by Stellantis and TotalEnergies —together with its subsidiary Saft—joined by Mercedes-Benz, and strongly supported by France, Germany, and the European Union.

Our new R&D Expertise Center is already up and running in Bruges (Bordeaux), along with a state-of-the-art Pilot Plant in Nersac, France (Nouvelle Aquitaine). Our first Gigafactory is being built in Billy-Berclau Douvrin, Hauts-de-France. Then there’s our new Applied Engineering Center and a second Lithium-ion Gigafactory planned in Germany for 2025. And we’ve announced a new Gigafactory in Termoli in Italy (subject to further confirmation).

That’s a total €7 billion of investment, and it’s just the beginning. We’re putting down long-term roots across the world, securing a global network of R&D associates, industrial partners, and suppliers.

ABOUT PROLOGIUM
Founded in 2006, ProLogium is a global leader in innovative next-generation battery technologies for vehicle, consumer, and industrial applications. ProLogium is the first battery company in the world to mass-produce solid-state lithium ceramic batteries. Its proprietary technologies cover nearly 600 (applied and awarded) patents worldwide. ProLogium’s automated pilot production line has provided nearly 8,000 solid-state battery sample cells to global car manufacturers for testing and module development. ProLogium’s GWh level solid-state lithium ceramic battery plant will be the first in the world to go online in early 2023, and it aims to begin scaling up by the second half of the year, followed by capacity expansion plans in major markets worldwide.

Decide which cookies you want to allow. You can change these settings at any time. However, this can result in some functions no longer being available. For information on deleting the cookies, please consult your browser’s help function. Learn more about the cookies we use.

With the slider, you can enable or disable different types of cookies: